We have promoted QB Bryn Renner and WR Chris Matthews to the active roster.

Renner, 25, wound up signing on with the Broncos as an undrafted free agent out of North Carolina back in May of last year. However, he lasted just a few month in Denver before he was waived at the start of the 2014 season.

The Ravens later signed him to a future/reserve contract at the end of last season, but he was once again among their final roster cuts coming out of the preseason. Baltimore later added him to their practice squad before cutting him just a few weeks later.

Renner has yet to appear in an NFL game.

Matthews, 26, originally signed on with the Browns as an undrafted free agent out of Kentucky back in 2011. He lasted just a few months in Cleveland before he was waived at the start of the season.

It took a few years for him to secure another opportunity, but he signed a future/reserve contract with the Seahawks in February of last year and went on to help in the Super Bowl.

Seattle elected to waive him a few weeks ago.

This season, Matthews has appeared in nine games and recorded four receptions for 54 yards receiving and no touchdowns. 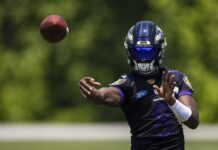