Ravens RB Justice Hill officially passed through waivers unclaimed on Thursday and has reverted to injured reserve, according to Aaron Wilson. 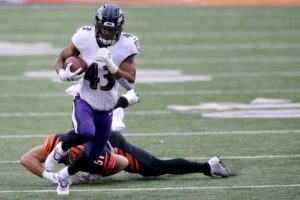 Hill suffered a season-ending Achilles tear in practice recently, which led to the Ravens signing Le’Veon Bell to their practice squad.

The Ravens waived Hill with an injury designation on Wednesday.