According to Mike Garafolo, Ravens RBs Mark Ingram and second-round rookie J.K. Dobbins are the two players who have tested positive for COVID-19. 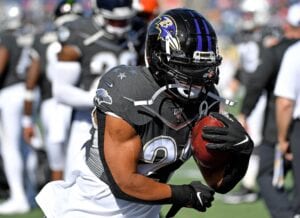 Both players will be out this Thursday against the Steelers and possibly the week after that as well depending on how things go.

Expect both to be placed on the COVID-19 list shortly. Ravens HC John Harbaugh said DT Brandon Williams will also go on the list as a close contact and quarantine for five days, per Jamison Hensley.

Ingram, 30, is a former first-round pick of the Saints back in 2011. He played out his rookie contract before returning to the Saints on a four-year, $16 million contract that included $7.6 million guaranteed a few years ago.

Ingram was testing the open market as an unrestricted free agent when he signed a three-year, $15 million deal with the Ravens in 2019.

In 2020, Ingram has appeared in seven games for the Ravens and rushed for 230 yards on 55 carries (4.2 YPC) and two touchdowns to go along with five receptions for 49 yards receiving.