According to Jeff Zrebiec, the Ravens are signing veteran OLB Brandon Copeland to their practice squad. 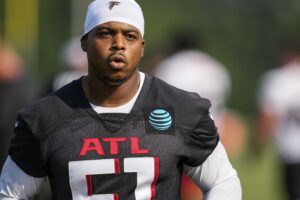 The following is an updated list of Ravens’ practice squad players:

Copeland, 31, signed with the Ravens as an undrafted free agent out of Pennsylvania back in 2013. He lasted just a few months with the team before he was waived and later caught on with the Titans during his rookie season.

After a year in Tennessee, Copeland signed a one-year contract with the Lions and returned to Detroit on a one-year, $615,000 exclusive rights contract the following year. The Jets signed Copeland to a contract in 2018 and he returned to New York in 2019 on a one-year deal worth up to $3 million.

The Patriots signed Copeland to a one-year contract and the following offseason he signed a one-year, $1 million contract with Atlanta.

In 2021, Copeland appeared in 16 games for the Falcons and recorded 39 total tackles.