Ian Rapoport reports that the Ravens and TE Mark Andrews have agreed to a four-year contract worth $56 million on Monday. 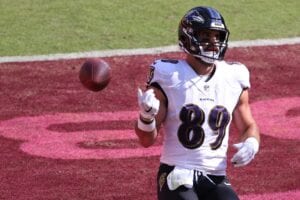 Andrews will make $14 million per year as part of this new deal.

This contract puts Andrews third in terms of the highest-paid tight ends in the NFL behind only Georgie Kittle ($15M per year) and Travis Kelce ($14.3M per year).

Andrews was in line to be an unrestricted free agent in 2022.

In 2020, Andrews appeared in 14 games for the Ravens and caught 58 passes for 701 yards receiving and seven touchdowns.