Thornton, 28, is a former third-round pick of the Colts back in 2013. He played out his four-year, $2,735,380 contract with the Colts and was testing the open market as an unrestricted free agent for the first time in his career when he signed a one-year contract with the Falcons.

Thornton was set to make a base salary of $690,000 for the 2017 season when he announced his retirement in 2017. From there, the Falcons released him a month later and he has sat out the past two seasons.

For his career, Thornton appeared in 37 games for the Colts. 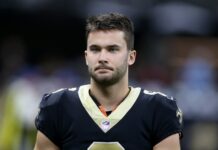