Jordan Schultz is reporting that the Buccaneers have officially ruled out TE Rob Gronkowski for Week 4’s game against the Patriots with a rib injury. 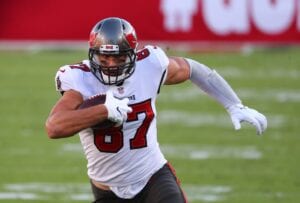 According to Adam Schefter, Gronkowski suffered multiple fractured ribs last Sunday that threaten to sideline him for multiple weeks. Initial X-rays came back clean but a follow-up MRI was not.

“We held out hope all week he’d be ready,” said a source told Schefter. “He’s a different breed.”

Gronkowski was listed as doubtful on Friday’s injury report, but indications were that he was unlikely to suit up against his odd team.

Gronkowski, 32, is a former second-round pick of the Patriots back in 2010. He was in the sixth year of his eight-year, $55.23 million contract that included $13.17 million guaranteed when he made the decision to retire in 2019.

The Buccaneers later acquired Gronkowski in a trade with the Patriots last year. He returned to the Bucs on a one-year, $10 million contract this past March.

In 2021, Gronkowski has appeared in three games for the Buccaneers and caught 16 passes for 184 yards receiving and four touchdowns.