Mike Klis reports that the Packers are not allowing OL coach Adam Stenavich to interview for the Broncos’ offensive coordinator job under new HC Nathaniel Hackett. 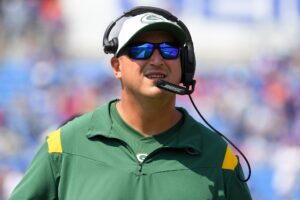 This is a pretty strong indication that Green Bay is set to promote Stenavich to offensive coordinator.

The Bears reportedly want to hire Packers QBs coach Luke Getsy, who is another internal candidate for the Packers’ vacancy, as their new offensive coordinator.

Regarding the Broncos, Albert Breer mentions Packers TEs coach Justin Outten as a name to watch for their offensive coordinator job.

Stenavich, 38, is from Wisconsin and played six years in the NFL for a number of teams. He began coaching in 2012 as a graduate assistant at Michigan.

From there, Stenavich worked for Northern Arizona and San Jose State as their OL coach before the 49ers hired him as an assistant in 2017. In 2019, the Packers hired Stenavich as their offensive line coach.

We’ll have more regarding the Packers and Broncos’ jobs as the news is available.