Groves has reportedly met with the Patriots and Redskins in recent weeks, so he appears to have a decent enough market developing for his services.

Groves, 30, spent the 2013 season with the Browns, before being released in early June. However, he was limited to playing in just five games due to an ankle injury that led to the Browns placing him on season-ending injury reserve.

Last year, he recorded four tackles, two sacks and a forced fumble over the course of those four games.

At this point in the year, he represents one of the best available linebackers, so it’s not surprising to see a few teams kick the tires on him in recent weeks. 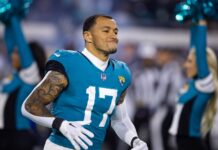