Adam Schefter of ESPN reports that Washington DE Ryan Kerrigan has requested to be traded. However, Washington has reportedly told teams that they won’t trade Kerrigan before next week’s deadline, despite his request. 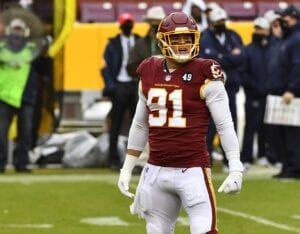 Kerrigan is one of the edge rushers who has come up as a potential trade candidate this year along with Washington’s Ryan Anderson.

Kerrigan said earlier this year that he was hoping to remain in Washington “for the long haul,” but his playing time has been reduced this season.

In 2020, Kerrigan has appeared in seven games for Washington and recorded eight tackles, four sacks and a fumble recovery.

Washington Wants Alex Smith Back In 2021