The New Orleans Saints brought in a number of players for tryouts on Monday including former Redskins S Bacarri Rambo, according to Aaron Wilson of the National Football Post.

Washington used a sixth-round pick on Rambo last year, but he struggled quite a bit in his first two years in the league. Pro Football Focus had him rated as the No. 79 safety out of 86 qualifying players last season.

Rambo, 24, was a liability in coverage as he’s allowed long touchdowns to Texans WR DeAndre Hopkins and Jaguars TE Marcedes Lewis in back-to-back weeks to start the 2014 season.

Since being waived by the Redskins, Rambo has worked out for a number of teams including: the Colts, Bears, Giants, Patriots, Buccaneers, and Titans.

We’ll have to see if New Orleans elects to sign him to their practice squad this week. 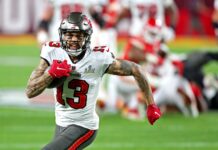