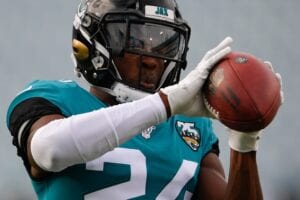 Meeks, 25, wound up going undrafted out o Stanford back in 2018. He later signed a three-year, $1.71 million contract with the Jaguars but was among their final roster cuts coming out of the preseason.

Meeks signed on to the Jaguars’ practice squad once passing through waivers unclaimed. He joined the Chargers in 2019 and returned to Los Angeles on a futures contract for 2020.

He bounced on and off the Chargers’ practice squad a couple of times in 2020 before landing back with the Jaguars and doing the same there for the rest of the season. He then played in the USFL in 2022.

In 2020, Meeks played in two games for the Chargers and four for the Jaguars but did not record a statistic.