The New Orleans Saints brought in free agent DE Dion Jordan for a workout on Monday, according to Aaron Wilson. 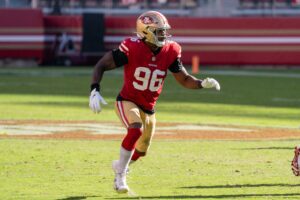 Jordan previously worked out for the Jets in August but was signed to a contract following the session.

Jordan, 31, was a first-round pick of the Dolphins in 2010 after Miami traded up to No. 3 overall to select him. The Dolphins cut him loose in the second year of a four-year, $20.572 million rookie contract.

The Seahawks signed Jordan to a one-year, $640,000 contract in 2017. Seattle brought Jordan back on a restricted deal worth around $1.9 million for the 2018 season. Jordan agreed to a one-year contract with the Raiders in 2019 before joining the 49ers last summer.