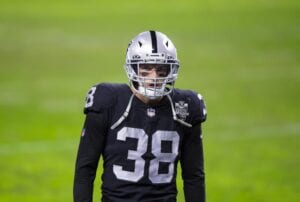 The Raiders signed him to a two-year, $8 million deal back in March of last year. Las Vegas released him this past May.

Sendejo, 33, originally signed on with the Cowboys as an undrafted free agent out of Rice back in 2010. He lasted just over a year in Dallas before he was claimed off of waivers by the Jets.

The Vikings later signed Sendejo to a four-year, $16 million contract that included $2.5 million guaranteed. He was set to make a base salary of $5.45 million for the 2019 season when the Vikings declined to pick up his option.

Sendejo later signed a one-year deal with the Eagles but was released midseason in order to protect a compensatory pick. He rejoined the Vikings to finish out the year.

From there, Sendejo signed a one-year contract with the Browns last year.

In 2020, Sendejo appeared in 14 games for the Browns and recorded 67 tackles, no interceptions, a forced fumble and two pass deflections.