Adam Schefter reports that Steelers LB Devin Bush did, in fact, suffer a torn ACL that will require season-ending surgery.

You can expect the Steelers to place him on injured reserve in the coming days and add someone to their roster.

Jason La Canfora of CBS Sports reports that the initial prognosis for Steelers LB Devin Bush is that he suffered an ACL tear during Sunday’s game against the Browns. 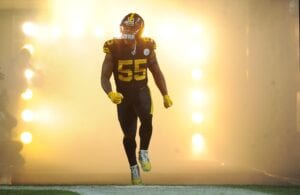 Pittsburgh fears that Bush is going to be out for the season, but he’s scheduled to undergo an MRI later tonight to determine the severity of the injury.

Bush, 22, is a former first-round pick of the Steelers back in 2019. Pittsburgh trade up to get him and parted with first-, second-, and third-round picks to do so.

Entering today’s game, Bush had recorded 21 tackles, a half-sack and three passes defended over the course of four games.

We’ll have more regarding Bush as the news is available.

NFLTR Review: Five Teams In Cap Jail In 2021 & How They’ll Bust Out