According to Ian Rapoport, the Steelers and GM Kevin Colbert will enter this offseason with the top priority of finding a replacement for QB Ben Roethlisberger. 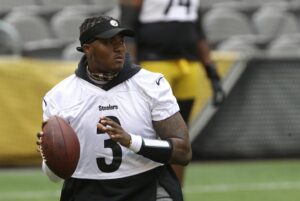 Rapoport cites people with knowledge of the situation who say that Colbert — who also is expected to retire later this year following the NFL Draft — is highly unlikely to trade multiple first-round picks for a big-name quarterback.

Pittsburgh pins its identity on drafting and developing players and Rapoport’s sources believe that’s the tack they’ll take to solve the problem of who plays quarterback for them next.

Steelers QB Mason Rudolph has one year remaining on an extension he signed with the team that will pay him $5 million in 2022. Rapoport says he’s expected to compete with QB Dwayne Haskins, a former first-round pick by Washington who has spent the season as the third-string option.

Haskins signed for the minimum this past offseason and is set to be a restricted free agent in 2022. However, Rapoport says he has caught the eye of Steelers HC Mike Tomlin.

Finally, the Steelers are expected to draft a quarterback, potentially with their first-round pick which will fall somewhere in the early 20s. While ordinarily they’d have to trade up, the 2022 QB class is not as highly regarded as other years in terms of clean evaluations, so they should have options.

Rapoport highlights Pittsburgh QB Kenny Pickett as someone the Steelers have had an opportunity to watch develop close by and who could be an option in the range they’re picking. The Steelers have also done extensive work on others in the 2022 quarterback class.

Rudolph will be an unrestricted free agent following the 2022 season.

In 2021, Rudolph appeared in two games for the Steelers and made one start. He completed 35-58 passes for 277 yards (60.3 completion percentage), one touchdown and one interception. He also rushed five times for 53 yards.

We’ll have more on the Steelers’ quarterback plans in 2022 as the news is available.