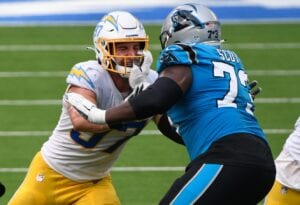 Scott, 28, wound up going undrafted out of Grambling State back in 2018. He later signed on with the Chargers and spent two years on and off of their roster.

The Panthers claimed Scott off of waivers at the start of the 2020 regular season. Carolina brought Scott back on a one-year contract last year.

In 2021, Scott appeared in 14 games for the Panthers, making five starts for them.