Ian Rapoport reports that the Texans are interviewing former Browns GM Ray Farmer for their general manager vacancy on Saturday.

The Texans fired GM Brian Gaine on Friday, making this the first official report of an interview for the Browns.

The Browns hired him as their assistant general manager in 2013 and was promoted to their official GM position for the next two years.

His time in Cleveland was highlighted by him being suspended four games and fined after admitting to texting down to the sidelines in the middle of a game during the 2015 season.

Farmer was fired by the Browns in January of 2016.

We’ll have more updates regarding the Texans’ GM search as the news is available. 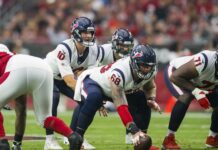