The Houston Texans are signing RB B.J. Emmons following a successful workout, according to Aaron Wilson. 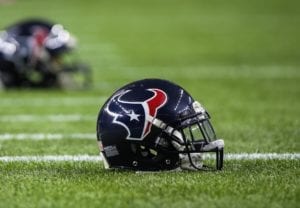 Emmons landed with the Jaguars practice squad in December, but was ultimately released in January.

During his college career, Emmons recorded 123 rushing attempts for 526 yards (4.3 YPC) and eight touchdowns, to go along with seven receptions for 38 yards (5.4 YPC) and no touchdowns.