Texans TE C.J. Fiedorowicz admitted that he’s been mulling his future in the NFL after suffering three concussions last year.

“A dude knocked me out,” Fiedorowicz said his first concussion in Week 1, via Joe Stevenson of the Northwest (Ill.) Herald. “After eight weeks, when I came back, it was constantly on my mind. I wasn’t always able to play loose and free. It was in my head. Anytime that’s on your mind while you’re playing an NFL football game, you’re in trouble. You can’t play timid. Guys are trying to take your head off, you know?”

Even so, Fiedorowicz hasn’t made any determination yet and plans to see how he feels in the coming months.

“You can’t go repair your brain,” Fiedorowicz said. “It’s not like an ACL or shoulder. That’s serious. I took some dingers. There was a couple of weeks there where I was having some tough times. This is what I’ve done my whole life, so to think that I’m going to walk away is tough. It’s not something that I thought of doing, because I signed the new deal, anytime soon. Life goes on, whatever happens.”

“I know I enjoy working out enough to be able to continue playing, but maybe I just need a little time away,” Fiedorowicz added. “I don’t have to make that decision right now.”

Back in December, Adam Schefter reported that Fiedorowicz could be forced to retire from the NFL after suffering he suffered his fourth concussion in the past two seasons, so this doesn’t come as a big surprise.

Sources have told Schefter that Fiedorowicz might not be able to play again, either by his choice or that of the Texans’ doctors. Schefter adds that there are no assurances at this point that Fiedorowicz will be able to pass a physical for the team, which would be required for him to return.

To make the situation more concerning, Schefter says that there was already some concern that Fiedorowicz could be forced into an early retirement even before he suffered another concussion upon returning from injured reserve.

In 2017, Fiedorowicz appeared in five games for the Texans and caught 14 passes for 127 yards receiving and no touchdowns.

We’ll have more regarding Fiedorowicz’s future as the news is available. 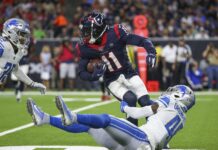