Tom Pelissero reports that the Texans will conduct a second interview with Broncos DC Ejiro Evero for their head coaching position on Wednesday. 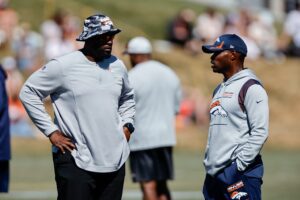 Evero, 41, was signed as an undrafted free agent by the Raiders out of UC Davis back in 2004 before returning to his alma mater as an assistant coach.

He then began his NFL coaching career with the Buccaneers as a defensive quality control coach before joining the 49ers and Packers in the same capacity.