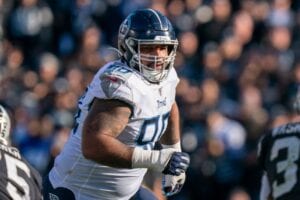 This leaves 10 players still on the Titans’ COVID-19 list:

After testing the open market, Jones returned to the Titans on a three-year, $21 million deal. He’s in the final year of his deal and will make a base salary of $7 million in 2020.

In 2020, Jones has appeared in three games for the Titans and recorded eight total tackles and no sacks. Pro Football Focus has him rated as the No. 73 interior defensive lineman out of 121 qualifying players.