The Tennessee Titans announced they signed TE Austin Fort to their practice squad on Tuesday.

Fort, 26, originally signed as an undrafted free agent with the Denver Broncos in 2019. Fort missed each of the last two seasons with season-ending injuries, first a torn ACL in 2019 then after undergoing arthroscopic knee surgery last year.

After Fort spent training camp with the team, the Broncos released Fort at final cuts this year.

Fort has yet to appear in an NFL game. 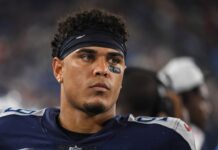