Jeremy Fowler of ESPN reports that several people around the NFL believe Titans OC Arthur Smith is the “front-runner” for the Falcons’ head-coaching vacancy. 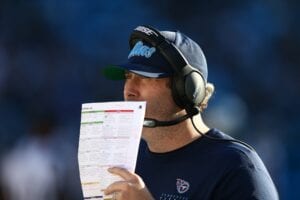 According to Fowler, Panthers OC Joe Brady is still in the mix for the job, but it could be Smith’s job to lose in the end.

Smith just wrapped up his second interview with Atlanta, so he’s at least a finalist for the job.

Other candidates for the job include: