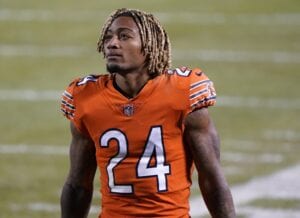 Skrine signed a three-year, $16.5 million contract with the Bears back in 2019 and had one year left on the deal when Chicago released him last year.

The 49ers signed him to a contract late last season before releasing him soon after.

In 2021, Buster Skrine appeared in seven games for the 49ers and Titans and recorded 17 tackles, one interception and three pass deflections.