The Tennessee Titans are signing third-round QB Malik Willis to his rookie contract, according to Aaron Wilson. 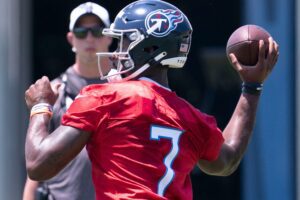 Willis, 22, started for two years at Liberty after transferring over from Auburn. He led them to a 17-6 record in his two seasons.

NFL Media’s Lance Zierlein says he has the build and play style of Eagles QB Jalen Hurts with the arm of former NFL QB Jay Cutler.

Willis threw for 5,176 yards over his four years at Auburn and Liberty, completing 62.8% of his passes. He threw for 48 touchdowns and 18 interceptions over his career. He also added 2,131 yards rushing over 366 attempts, and 29 career rushing touchdowns.