The Tennessee Titans officially waived OT Anthony McKinney from injured reserve with a settlement on Tuesday. 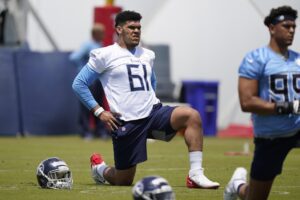 McKinney, 23, wound up going undrafted out of TCU back in May of last year. He later signed a rookie contract with the Titans.

Tennessee opted to waive McKinney last week with an injury designation and he just recently reverted to their injured reserve list.

During his college career at TCU, McKinney appeared in 24 games over the course of two seasons.