Dye, 23, wound up signing on with the Buccaneers as an undrafted free agent out of Heidelberg back in May of last year. He was unfortunately among the Buccaneers’ roster cuts coming out of the preseason, but was later signed to their practice squad and eventually promoted to their active roster in October of last year.

Tampa Bay waived Dye during the preseason with an injury designation and he later reverted to their injured reserve list. The Bucs cut him loose an injury settlement a few days later.

In 2015, Dye appeared in 10 games for the Buccaneers and caught 11 passes for 132 yards receiving and one touchdown. He also contributed 37 kick return yards.

Williams, 26, wound up signing on with the Texans as an undrafted free agent out of Cumberlands back in May. He was cut loose as the Texans trimmed their roster down to 53 players.

Williams later caught on with the Jets’ practice squad but was released last week to make room for  LB Julian Stanford.

During the preseason, Williams caught two passes for 16 yards receiving and lost a fumble. 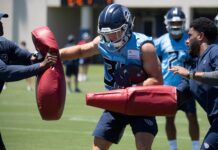