According to Howard Balzer, the Tennessee Titans brought in six free agents for workouts on Tuesday.

Of this group, the Titans signed Stringfellow to their practice squad.

Lucien, 25, is a former seventh-round pick by the Patriots out of Arizona State in the 2016 NFL Draft. He was in the first year of a four-year rookie contract when the Patriots decided to waive him and sign him to their practice squad.

New England re-signed him to a futures contract back in February but was eventually waived with an injury settlement at the start of the 2016 season. Lucien had brief stints on the Colts, Chiefs, and Texans’ practice squads before joining the Buccaneers. 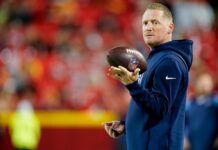