Buccaneers QB Tom Brady has said for a while now that his goal is to play until he’s 45, which would mean two more seasons for the current 43-year-old. 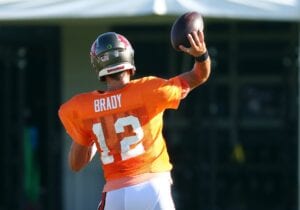 But asked on Monday as he prepares for his 10th Super Bowl, Brady said if he’s still playing at a high level he would “definitely” like to keep playing beyond 45, per Doug Kyed.

“It has to be 100 percent commitment on my part to keep doing it,” Brady added via Karen Guregian.

Few quarterbacks ever have played as long as Brady has and almost none have continued to play at as high a level as he has maintained. Despite switching teams for the first time in his career, Brady still led Tampa Bay to the Super Bowl and was incredibly productive during the regular season.