According to Ian Rapoport, the Giants are trading DT B.J. Hill to the Bengals for C Billy Price. 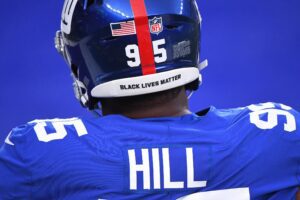 Pat Leonard adds the Bengals will receive a conditional seventh-round pick from the Giants along with Hill.

New York has had some issues on the offensive line, so they flip Hill at a position they’re deep at for Price, a former first-round pick.

Price was beaten out by Trey Hopkins to start at center and has never been able to find a groove in Cincinnati. He’s been tried out at guard and it’ll be interesting to see if the Giants want him at guard or plan to move Nick Gates from center.

It’s also worth mentioning the Giants clear about $2 million in cap space by trading Hill.

In 2020, Price was active for all 16 games, making one start for the Bengals.

In 2020, Hill appeared in all 16 games for the Giants and recorded 32 total tackles, two tackles for loss, one sack and one pass defense.