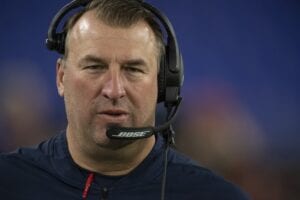 “Illinois and the Big Ten is home for me, and I can’t be any more excited about the opportunity in front of me with the Fighting Illini,” Bielema said. “We want to build a program that makes Illini Nation proud and regain the passion that I’ve seen when Illinois wins. We want the young men playing football in the state of Illinois from Freeport to Cairo and from Quincy to Danville dreaming of wearing the Orange and Blue and playing at Memorial Stadium. I look forward to re-connecting with the high school coaches around the state making it clear we intend to keep our players home.

“We will build an outstanding staff for both player development and recruiting. The University of Illinois has incredible facilities and is known as one of the world’s outstanding academic institutions. We will hold the young men on our team responsible both on and off the field while coaching them to be champions in life. Jen and I, along with our girls, are excited to get to Champaign-Urbana and get started on the journey. Go Illini!”

Bielema gets a six-year, $4.2 million contract, according to Ian Rapoport. He’s expected to begin as Illinois’ head coach immediately, so he’s leaving the Giants midseason.

Bielema, 50, began his coaching career at Iowa as a graduate assistant back in 1994. He worked his way up to LBs coach before departing for a job at Kansas State.

Wisconsin later hired Bielema as their defensive coordinator in 2004 and promoted him to head coach two years later. He spent seven years as the team’s head coach before departing for the head-coaching job at Arkansas.

Unfortunately, Arkansas fired Bielema after five years and he agreed to join the Patriots in 2018 as a consultant. The Giants hired him as their OLBs coach this past January.

During his coaching career at Wisconsin and Arkansas, Bielema posted a record of 97-58 (62.5 percent) and 10 bowl appearances.