Per Adam Schefter, veteran OL Laurent Duvernay-Tardif says he is beginning a medical residency program and putting his NFL career on hold for now. 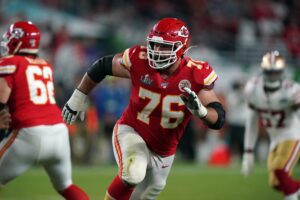 However, Duvernay-Tardif has not closed the door to playing this season while he pursues the remaining medical requirements for him to become a practicing physician.

“I’m going to prioritize medicine … and we’ll see in September if there’s a fit,” Duvernay-Tardif said. “After eight years in the NFL, and I don’t want to sound pretentious by saying this, but I think I’ve earned the right to do what’s best for me and not just for football and kind of bet on myself a little bit.

“I’m really comfortable with the risk, and I’m pretty confident there’s going to be an offer on the table in September if I want it. And if I want it I’ll take it. If medicine is going well and I feel like I’ve got to be out there in front of 80,000 people to play the sport I love, well, I’ll go, but I think I want it to be more on my terms.”

Duvernay-Tardif opted out of the 2020 season in order to use his medical background working as an orderly at a long-term care facility in Canada while helping to fight COVID-19.

Duvernay-Tardif, 31, is a former sixth-round pick of the Chiefs back in 2014 out of McGill. He was entering the final year of his rookie contract when he agreed to a six-year, $41.94 million extension that included $14 million guaranteed.

Duvernay-Tardif was set to make a base salary of $6.203 million for the 2020 season when he opted out to work as a medical orderly in Canada during the pandemic. He agreed to a restructured contract that lowered his salary to $2.75 million for 2021.

He was traded to the Jets midseason and played out the rest of his deal.

In 2021, Duvernay-Tardif appeared in eight games for the Jets and made seven starts. He was rated by Pro Football Focus as the No. 68 overall guard out of 82 qualifying players.