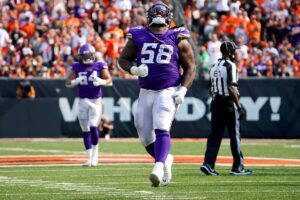 According to Rapoport, the Vikings tried to retain him on a moderate pay cut and even attempted to trade him. In the end, no trade materialized so they opted to release him.

The Vikings have since signed DT Harrison Phillips.

Pierce, 29, wound up signing on with the Ravens as an undrafted free agent out of Samford in 2016. He played out the final year of his three-year rookie contract before returning to the Ravens on a second-round restricted tender.

He was testing the open market as an unrestricted free agent for the first time in his career when he signed a three-year, $27 million deal with the Vikings in 2020.

Pierce was slated to make a $3 million, fully-guaranteed base salary in 2020 before opting out due to the pandemic. That total was tolled to 2021.

According to OverTheCap.com, releasing Pierce will free up $6,235,294 of available cap space while creating $4 million in dead money.

In 2021, Pierce appeared in eight games and recorded 20 tackles, three sacks, and a forced fumble.