Vikings WR Cayleb Jones has been suspended four games for violating the NFL’s PED policy, according to James Palmer.

Jones, 24, wound up signing a three-year, $1.62 million contract with the Saints as an undrafted free agent out of Arizona back in 2016. He was unfortunately waived with an injury designation coming out of the preseason and later reverted to their injured reserve list.

The Eagles elected to waive Jones from injured reserve a few weeks into the 2016 regular season and he eventually signed on to the Vikings’ practice squad before returning to Minnesota on a futures deal last year.

Unfortunately, the Vikings cut Jones loose at the start of the season before re-signing him to their practice squad. Jones returned to the Vikings on a futures contract this past January.

During his college career at Arizona, Jones caught 129 passes for 1,926 yards receiving and 14 touchdowns over the course of 27 games. 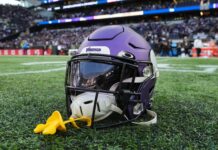