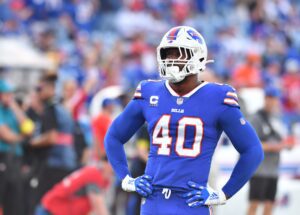 The surgery will end Miller’s 2022 season and he’ll now turn his attention to rehab and coming back in 2023.

He had already been placed on injured reserve with the hopes of being back for the playoff run.

Miller, 33, is a former first-round pick of the Broncos back in 2011. After playing out his rookie deal, Denver picked up his fifth-year option and later used their franchise tag on Miller.

Denver officially picked up Miller’s option last year and again in 2021 at a figure of $18 million. However, the Broncos traded Miller to the Rams at the deadline for second and third-round picks while also eating most of his remaining salary. Miller then ended up winning the Super Bowl in his first season with the Rams.

Miller went on to sign a six-year, $120 million deal with the Buffalo Bills as an unrestricted free agent.

In 2022 entering Week 12, Miller had appeared in 10 games for the Bills, recording 20 total tackles, 10 tackles for loss, eight sacks, a forced fumble and two pass deflections.