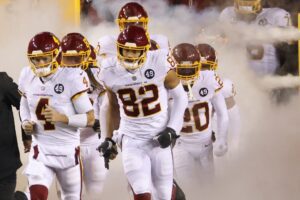 The plan is for Thomas will undergo further testing to confirm the severity of the injury after the team returns to Washington.

Thomas was attempting to make a block when a defender went low on him and hit his knee.

Thomas was in the third year of his four-year, $2,652,092 rookie contract when the Dolphins waived him in 2017 and he was later claimed by the Giants. He had a brief stint with the Lions after he made the decision to convert to tight end and later caught on with the Bills.

In 2021, Thomas appeared in five games for Washington and caught 15 passes for 148 yards and two touchdowns.