Washington DE Chase Young went down with a non-contact, right knee injury in the second quarter against the Buccaneers on Sunday. Ian Rapoport reports the initial fear is that Young has a torn ACL, which would likely mean he will miss the remainder of the season. 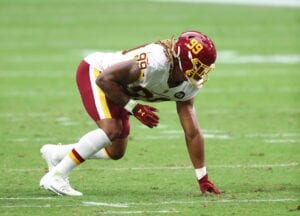 Young, 22, was a two-year starter at Ohio State and was a first-team All-American when Washington used the No. 2 overall pick in the 2020 NFL Draft on him. He was later named the NFL’s Defensive Rookie of the Year for the 2020 season.

In 2021, Young has appeared in 10 games for Washington, recording 25 tackles and one and a half sacks.

We will have more news on Young’s injury as it becomes available.