According to Kevin Sheehan, Washington DL Matt Ioannidis suffered a torn bicep in Sunday’s loss to the Browns and is potentially out for the rest of the season. 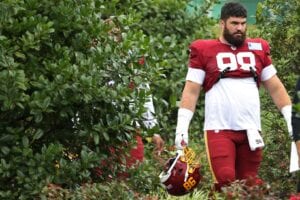 Mike Garafolo confirmed the news and the diagnosis.

Ioannidis is set to make base salaries of $5.35 million and $6.6 million the next two seasons.

In 2020, Ioannidis appeared in three games for Washington and recorded seven total tackles, including two for a loss, and 1.5 sacks. Pro Football Focus had him rated as the No. 41 interior defender out of 119 qualifying players.