According to Ben Standig, the Washington Football Team is planning to place TE Logan Thomas on injured reserve and sign RB Jonathan Williams from the Giants’ practice squad to the active roster. 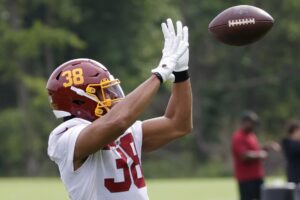 This would be Thomas’ second stint on injured reserve, meaning his season is over.

He suffered a knee injury in the Week 13 win over the Raiders, and while it appears he avoided tearing his ACL like it was initially feared, it’s apparently still severe enough to end his 2021 season.

Thomas was in the third year of his four-year, $2,652,092 rookie contract when the Dolphins waived him in 2017 and he was later claimed by the Giants. He had a brief stint with the Lions after he made the decision to convert to tight end and later caught on with the Bills.

In 2021, Thomas appeared in five games for Washington and caught 15 passes for 148 yards and two touchdowns.