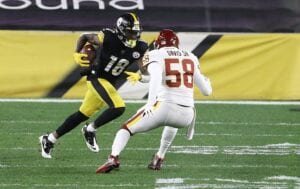 Davis announced after the season that he planned to retire.

Davis, 37, is a former first-round pick of the Panthers back in 2005. He was in the final year of his three-year, $18 million contract when he and the Panthers agreed to a one-year, $6.75 million extension through 2018.

The Panthers informed Davis after the 2018 season they would not be bringing him back and he later signed a two-year, $10.5 million deal with the Chargers. Unfortunately, Los Angeles released him last year.

In 2020, Davis appeared in seven games for Washington and recorded six tackles, no sacks and a pass defense.