According to Ian Rapoport the Washington Football Team is releasing RB Peyton Barber on Tuesday. 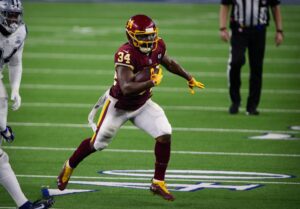 Barber, 27, wound up signing on with the Buccaneers as an undrafted free agent back in 2016. He was released coming out of the preseason during his rookie year but was later added to the Buccaneers’ practice and eventually promoted to their active roster.

Tampa Bay brought Barber back on a one-year contract in 2019. Barber then signed a two-year $3 million deal with Washington last offseason.

Gandy-Golden, 23, was drafted by Washington in the fourth round of the 2020 draft. He had a hamstring injury that held him to just six games last year.