According to Tom Pelissero, the Washington Football Team is signing K Brian Johnson off the Bears’ practice squad to their active roster. 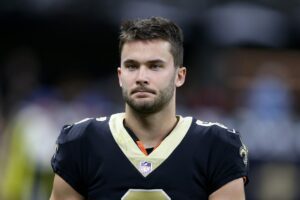 This move comes a day after K Joey Slye injured his hamstring and will miss at least three weeks.

Johnson, 22, signed with the Bears as an undrafted free agent out of Virginia Tech following the 2021 NFL Draft. Chicago waived him coming out of the preseason and re-signed him to the practice squad.

The Saints signed Johnson off Chicago’s practice squad in October, and he spent a month as the team’s kicker. New Orleans then waived Johnson a month later, and he caught back on with Chicago.

In 2021, Johnson played in four games for the Saints, going 8 for 8 on field goal attempts and 5 for 8 on extra point attempts.