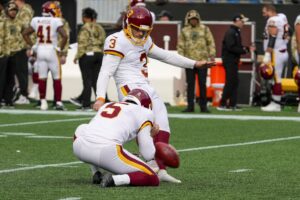 Slye will miss at least three weeks with a hamstring injury. He suffered the injury chasing a blocked extra point return on Monday night.

However, the Panthers cut Slye coming out of the preseason and he caught on with the Texans as an injury replacement. He also had a stint with the 49ers in the same capacity. Washington signed him to be their primary kicker in November after they released K Dustin Hopkins.