A few weeks ago, Ryan said that Williams was a “50/50” to return this year, but it became clear that it was unlikely he would be able to return.

Williams sustained a PCL injury close to a month ago that was expected to keep him out of the lineup for 3-4 weeks.

This season, Williams recorded 14 tackles and a sack for the Bills’ defense over the course of six games. Pro Football Focus has him rated as the No. 30 defensive tackle out of 67 qualifying players. 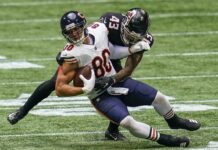