Free agency has died down quite a bit now that we’re nearly a full month in, which means the spotlight is shifting to the 2022 NFL Draft. The first round will be on April 28, just a few weeks from now. 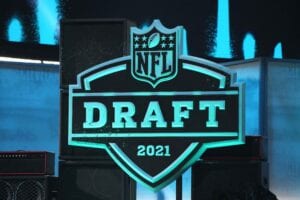 Here’s our second look at how things could play out in our 2022 NFL Mock Draft, plus some additional draft resources we’ve compiled as well.

The Jaguars moves in free agency imply edge rusher is where they’re headed to open the draft and it helps that Hutchinson is considered by most experts to be the best prospect in this year’s draft class. There has been some buzz about Travon Walker in recent days, but I’m sticking with Hutchinson for now.

Walker has been a popular name as someone who could go as high as No. 1 overall this year. He fits an obvious need for the Lions and offers high upside and incredible athletic traits.

The Texans’ roster dictates that they should go with who they feel is the best player no matter the position. Neal seems like a high-floor prospect who plays a premium position in the NFL. He could start out for them at right tackle and eventually move to left tackle should they move on from Laremy Tunsil at some point in the future.

The Jets are in an interesting spot, as they could go a few ways with this pick or even look to trade back. Gardner has good size for cornerback and tested pretty well during the process. Lance Zierlein’s NFL comp for Gardner is Richard Sherman.

The Giants benefit from one of the top offensive line prospects falling into their laps at No. 5 overall. Ekwonu is a really interesting prospect who has versatility along the offensive line, but also a high upside as a left tackle.

The Panthers do seem like a candidate to trade down in round one, but should they keep the pick, there’s a case to be made for taking a quarterback. Willis, arguably, has the highest upside of any quarterback in this draft class and possesses incredible physical tools.

The Giants once again benefit from being patient and letting the board fall to them. They could really use a high upside pass rusher and Thibodeaux at one time was in the discussion to be the No. 1 pick in this year’s class. Lance Zierlein compares him to former OLB Brian Orakpo.

With Calvin Ridley suspended for the entire season and the Falcons doing little to improve the position in free agency, receiver is a position they need to look long and hard at in this year’s draft. Wilson would give them a solid prospect at receiver as they work to rebuild their offense in the coming years.

Seattle is in a rebuilding phase, so it’s hard to say which way they’ll ultimately go when QB, OL, EDGE, and CB are all major needs. Cross is an interesting prospect as a premium position who would give Seattle a potential long-term solution at left tackle. They currently have former sixth-round pick Stone Forsythe as their stater at this point in the offseason.

The Jets come back and get an edge defender in Johnson with their second pick. New York could also consider WR and Safety here, but Johnson would give them another quality pass rusher to pair with Carl Lawson, who is working his way back from a torn Achilles. Lance Zierlein compares him to Raiders DE Maxx Crosby.

Hamilton’s athleticism and versatility would be hard to pass on at No. 11 overall. Some experts view Hamilton as a top-5 prospect in this year’s draft class and he would fill a need on the backend of the Commanders’ defense. Lance Zierlein compares him to former S Kam Chancellor.

Stingley had an incredible freshman season and was once seen as a consensus top-5 pick. He still has some supporters, despite the injuries and inconsistencies he showed the past few years. Even so, the Vikings could really use an impact corner to add to their secondary. Lance Zierlein compares him to CB Stephon Gilmore.

This seems like a potential trade spot for a team looking to move up for a quarterback. Houston has plenty of needs and could use all the picks they can get. However, should they keep the pick, cornerback seems like an area that could make some sense for them. McDuffie isn’t the biggest corner, but he’s a very competitive player with versatility. Lance Zierlein compares him to CB Jaire Alexander.

The Ravens have been cycling through pass rushers for a while now and they could still use some help at the position. Karlaftis isn’t the flashiest edge rusher in this class but he’s solid, steady and productive.

Lloyd appears to be the consensus top linebacker in this class and would fill a major need in the middle of the Eagles’ defense.

The Saints recently acquired this pick from the Eagles for future draft capital, so they will be looking to make the pick count. Landing a top receiver at this point in round one seems like a good way of doing just that, given that receiver is one of the team’s top needs.

The Chargers have a pretty strong roster and areas of real need. Wyatt is an explosive interior player with good size who would be a great addition to the middle of the team’s defense.

Olave would be a great fit opposite of DeVonta Smith and give the Eagles a very exciting young duo of receivers to build around in the years to come. Lance Zierlein compares him to Commander’s WR Terry McLaurin.

We have the Saints address a top need earlier by grabbing a receiver and they come back and get an offensive tackle with their second first-round pick. Penning has potential to be a day-one starter for a team at left tackle and the Saints are still looking to replace Terron Armstead.

The Steelers’ quarterback position remains a long-term question mark, given that Mason Rudolph and Mitch Trubisky are expected to battle it out for the starting job. Pickett is widely viewed as the safest quarterback in this class and could be a long-term fit for the team.

The Patriots are another team to watch to trade down in round one, possibly with a team looking to jump the Packers for a receiver or get a quarterback. Should New England hold the pick, interior offensive line could make some sense for them, as it would allow them to build out their ground game.

There’s no question that Green Bay will have their on potential receiver options this year. Williams could have been the first receiver off the board and a top-10 pick had he not suffered a torn ACL. There have been Will Fuller comps attached to Williams.

The strength of the Cardinals remains their passing attack. Burks could slot into the starting lineup, depending on how things go this summer, after losing Christian Kirk to the Jaguars and A.J. Green still out there as a free agent. Lance Zierlein compares him to Titans WR A.J. Brown.

The Cowboys’ roster remains pretty strong, but their offensive line play hasn’t been up to par recently. Johnson could slot in right away at left guard for Dallas and be a potential long-term fit in the years to come. Lance Zierlein compares him to former G Larry Warford.

The Bills are one of the deepest rosters in the league, so it’s hard to find a real area of need outside of running back and some depth at other positions. Although, cornerback depth couldn’t hurt and Booth would give them a ballhawk type of player. Lance Zierlein compares him to veteran CB Janoris Jenkins.

Receiver seemed like an obvious pick here before the Titans acquired Robert Woods in a trade with the Rams. Raimann is a high-upside offensive line prospect, who could start out at guard if need be or play right tackle should he beat out Dillon Radunz for the job.

Tampa Bay still has Vita Vea in the middle of their defense, but the depth beyond him is limited. In recent years, the Buccaneers had a very strong interior defensive line unit with Vea, Ndamukong Suh and Steve McLendon. Davis is one of the most imposing defensive linemen in this class. He’s got the size of a true space-eating nose tackle but the athletic ability to also play three technique. Lance Zierlein compares him to former DT Haloti Ngata.

Green Bay doubling up on receivers in round one would go against their recent draft history, as they’ve avoided taking a single receiver in the first round for nearly 20 years. However, the position is too baren right now and with Aaron Rodgers returning for the 2022 season, the Packers will need to give him some weapons. Lance Zierlein compares him to veteran WR Emmanuel Sanders.

The Chiefs are reworking some units again this offseason, but as of now, edge rusher seems like a potential option for Kansas City. Ojabo was likely to be a mid-round pick had he not suffered a torn Achilles during Michigan’s pro day. Ojabo can redshirt as a rookie with the Chiefs benefiting in the years to come.

The Chiefs haven’t made a big investment in cornerback yet. Although they’ve been linked to Stephon Gilmore in free agency. Elam has strong physical tools and good size for the position.

Nakobe Dean falls into the Bengals’ laps at No. 31 overall. As of now, the Bengals have Logan Wilson and Gremaine Pratt as their starting linebackers on defense. Dean would give them a high-upside, three-down linebacker in the middle of their defensive unit.

At this point, there could be an incentive for Detroit to consider taking the best available quarterback prospect to compete with Jared Goff this offseason. Corral has a starter potential and even if he’s not ready to win the job outright as a rookie, the Lions would have a fifth-year option to pick up on him down the road should he prove to be a fit.