The San Francisco 49ers were award OT Michael Philipp off of waivers from the Dolphins on Tuesday.

Philipp signed on with the Browns as an undrafted free agent out of Oregon State in May. He only lasted a little over a week with Cleveland before he was cut loose and later caught on with the Dolphins.

Philipp tried out for the Dolphins during their rookie camp and impressed the team enough to give him a shot, but he was once again released on Monday.

At OSU, he played both right and left tackle, but was working at both tackle and guard for the Dolphins. 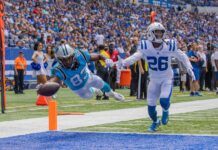