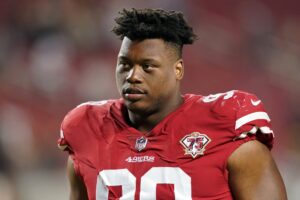 This opens a 21-day window for Givens to practice before being activated.

Givens, 24, signed on with the 49ers as an undrafted free agent back in 2019 out of Penn State and was activated from their practice squad in December during his rookie season.

In 2020, Givens appeared in 13 games and recorded 19 tackles, five tackles for loss and one sack.