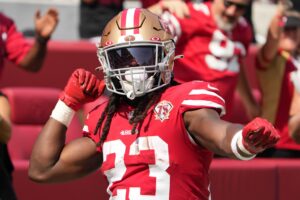 Hasty, 25, wound up going undrafted out of Baylor back in 2020. He later signed a rookie contract with the 49ers and was on and off of their practice squad last year.

San Francisco eventually added Hasty to their active roster. He was placed on injured reserve with a high-ankle sprain.

In 2021, Hasty has appeared in two games for the 49ers and rushed for 41 yards on six carries (6.8 YPC) to go along with five receptions for 36 yards receiving and one touchdown.