The 49ers announced on Friday that they are elevating practice squad QB Nate Sudfeld to their active roster. 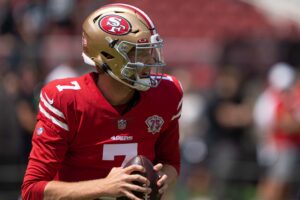 Sudfeld, 28, is a former sixth-round pick of the Redskins back in 2016. He signed a four-year, $2.47 million contract with Washington but was cut loose coming out of the 2017 preseason.

The Eagles re-signed Sudfeld on three consecutive one-year deals and he was testing the market as an unrestricted free agent when he signed with the 49ers. However, San Francisco cut him coming out of the preseason and re-signed him to their practice squad.

In 2020, Sudfeld appeared in one game and recorded five completions on 12 attempts (41.7 percent) for 32 yards, no touchdowns, and one interception, to go along with two rushing attempts for 12 yards.